On the 10th October, I suffered an eye injury which left me blinded in my right eye for several hours. No words can describe the wave of emotions that overcame me during my temporary loss of vision. Currently, my vision is still blurred, but it is getting better day by day and my Ophthalmologist (eye doctor) is confident that I will recover fully. Looking back, I’m glad this incident happened as it has given me an opportunity to reflect on my life and the things which are most important to me. My experiences as a patient seeking medical care in a foreign country has also given me some things to think about as I prepare to embark on a career as an Orthopaedic surgery resident.

Upon arrival at Boulder Community Hospital, I was again asked again to provide my insurance card. However, as a foreigner, I would pay for the treatment myself before claiming from my NTUC Income PA Assurance Insurance (link here). The eye doctor on-call arrived 30 minutes after I checked into the ER.

Upon arrival, Dr Gustave immediately proceeded to use a variety of tools to examine my eyes for any major complications that would require immediate surgery. Thankfully he managed to rule out a globe rupture (this is a serious condition that will require immediate surgery) and my lasik flap was still intact. Finally, I was informed that my injury was a traumatic hyphema of the right eye (ie. bleeding in the anterior chamber of the eye). Basically, this was the best case scenario that could have come out of such a traumatic accident. Dr Gustave then explained that while a hyphema is self-limiting and will resolve on its own, there are many complications that can arise that may require intervention such as raised eye pressure.

He proceeded to continue the examination of my retina with his indirect opthalmoscope. However due to the hyphema, he was unable to see the retina clearly. Instead, he needed to do an ultrasound scan of the eye to look for any gross retina tear or detachment.

Even at this point, I was still preoccupied with my running! Despite the fact that I’d almost just lost my vision in one eye, I was most concerned if I could still run. Dr Gustave gave me “the look” and told me that at the moment, preserving my eye sight was the top priority as it could affect my career as a surgeon. Running should not be my top priority now, he chided.

Dr Gustave personally wheeled me back to the ER to perform the ultrasound on my eye. There was no gross retina detachment seen on the ultrasound at the moment so that was good.

I was then discharged from the ER with steroid and pupil dilator eye drops. In addition, I was instructed to sleep at a 45 degrees elevation of my head to allow blood to settle downwards and be absorbed away. I also had to avoid any form of activity that could increase blood pressure and thus result in a rebleed which could worsen my prognosis. This meant no running or any other form of cross training that can raise my heart rate! I heart sank when I heard this as this would mean a great blow to my training. Not only could I not run, I could not maintain my fitness by doing cross training! I would then need to see him again the next day to get my eye pressure checked.

I was slotted in to see him again the next day which is a Sunday to have my eye pressure checked. 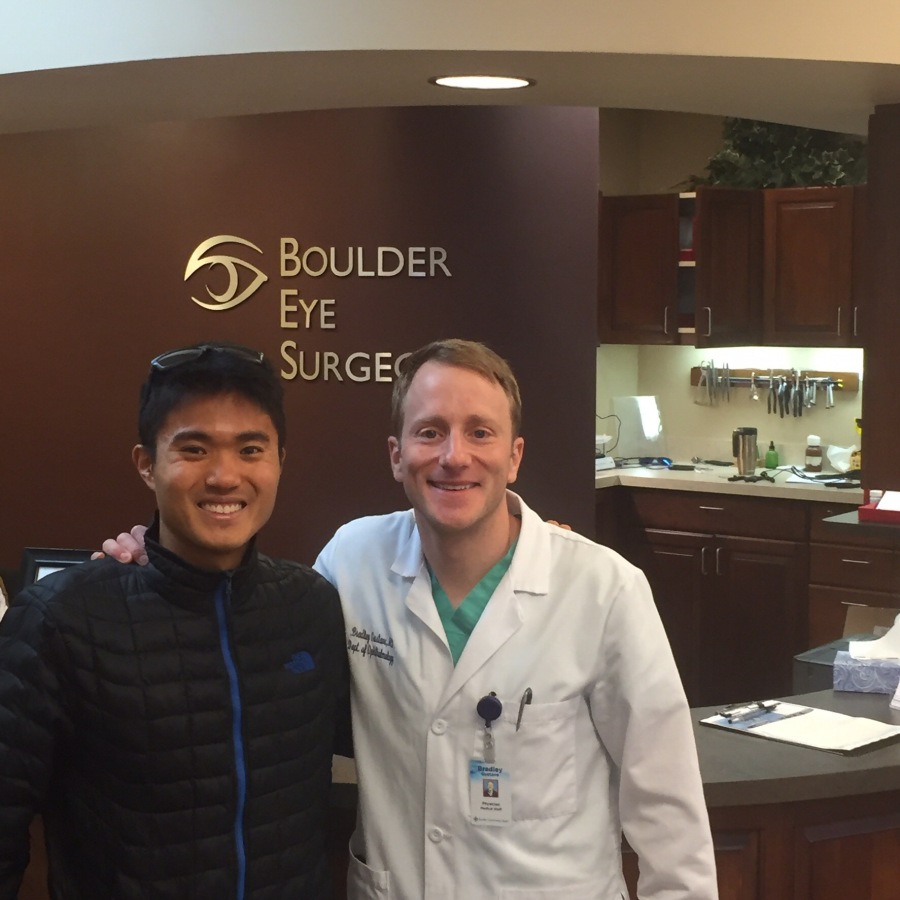 My encounter with Dr Gustave also taught me about professionalism and patient communication which really cannot be learnt from text books. Sometimes, having the best knowledge does not make you a good doctor if you are unable to build rapport with your patients and to understand their concerns. Dr Gustave was very professional throughout and addressed many of my concerns in a very friendly and approachable manner. During the lighter periods of my consult, he shared that he was on his way to watch a soccer game after dinner when he received the call about my case. Putting patient care first, he had to forgo his soccer game. However at no point during my consult did I feel he was hurrying to get back to his soccer game. Because of the risks of my condition, he even had to come back the next day, a Sunday to check on me. Being a doctor is about putting another human’s life in front of our own needs.