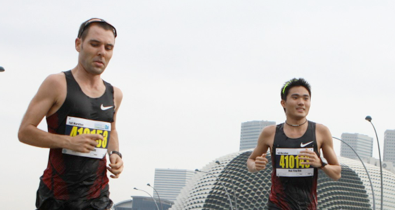 4 Months Before
Right after the Army Half Marathon, I decided to take a break from running. My left foot just could not handle the stress of running anymore. I could not run a single step the day after AHM. It was that bad. But I figured I was still three months from the SEA Games, I could rest up for two weeks and get back in action.

But no, the pain did not get better.

An MRI scan showed non-specific inflammation of the plantar fascia and I underwent a series of therapy with Dr Cormac O’Muircheartaigh from the Singapore Sports Council (SSC). I also visited Dr Ben Tan for an ultrasound scan and discuss some strategies I could take to maintain fitness and prevent aggravation. Painkillers were taken like candy but the pain was still not low enough on the scale for me to start running.

Throughout this period, I engaged in evidence-based cross training consisting of cycling and water running to maintain my fitness as much as possible. But trust me — it was extremely boring.

2 Months Before
The decision whether to run the SEA Games or not had to be made. Two months of no running and one month left to the South-east Asian (SEA) Games — was it still possible to get the mileage up and run competitively at the games and be in medal contention? After much discussion with doctors, Jason Lawrence, my advisor and training buddy, Mr Kunalan from the Singapore Athletic Association (SAA), the decision was that it was not safe to run the SEA Games and risk an aggravation of the injury.

1.5 Months Before
With the SEA Games out of my list, I had the peace of mind to rest for another two weeks before deciding whether to run at the Singapore Marathon. Every morning I tested my foot by prodding it with my fingers to see how it was recovering.

1 Month Before
I started off with a 5km jog. No pain during the jog but soreness after the run. Just 5km. I had to complete eight times that distance in a month’s time. Doubts passed through my head every now and then. I progressed gradually up the ladder — 8km, 10km, 15km — and so on, and eventually completed a 30km jog without pain, but still had soreness after the run. It was tough. I had to do lots of damage control post runs with R.I.C.E. (Rest, Ice, Compress, Elevate) protocol.

2 Weeks Before
Believe it or not, the top of my left foot swelled up like a balloon after an easy run. It got me worried. I figured it may be due to my overcompensating for my heel injury, as I had to adjust certain portions of my shoe to allow me to run comfortably.

Fortunately, after close monitoring and an attempt at self-diagnosing, I realised that the swelling may not be as serious as it seemed and I decided to keep up with the running. After all, there were only two weeks left.

I was also fortunate that my girlfriend, Dinah Chan, had also just finished her SEA Games, bringing back two medals which inspired me to train harder. She also had more time to help me in my preparation.

2 Days Before
After consultation with Dr Cormac, I got medically cleared to run the marathon. After all, I had no pain during long runs and no pain during workouts. And in addition, to be competitive, I will have to run a 2:40-2:45 marathon, which was within my capabilities at that moment.

Race Morning
As usual, I could not sleep the night before. Probably got in only three hours of sleep. I woke up and actually decided to experiment with what the optimum pre-race nutrition should be. Even though I have spoke about it in general terms in my talks, about High Glycemic Index (GI) and Low GI, I actually did not really know the exact specifics on how much to eat and so on.

I opened a book on Marathoning and turned to the nutrition page and ate exactly what was recommended in it. I would not advise such experimentation on race day but today was all about experimentation. Running with one month build up was by itself an experiment.

My parents drove me to Raffles City and I met up with Jason and Sia Chuan Han (2010 MR25 Ultramarathon champion) and we did a warm up towards the start line. It was still early. We were near the start line at about 4:20am. We decided to chill at Killiney post office and waited till 4:45am before jogging to the start line.

At the start line, music was blasting, atmosphere was great, decorations were beautiful. I had a brief exchange with fellow Singaporean Ashley Liew and some other runners from Malaysia and Kenya. Nothing too serious, just trying to lower the tension. I was still unsure if my training was sufficient to tide me through.

Without a countdown of any sort, the horns sounded and the race started. I really love the starts of races. The atmosphere was just fantastic. I had a full bladder and had to stop at the 1.5km mark before the tunnel to empty it. I caught back up to Jason and Devathas thereafter.

5km Mark
My parents were there to cheer us on and it was great!

10km Mark
One of our running buddies, Jayanta, cheered us on. Jason, Devathas (eventual 4th place), Chee Yong (eventual 2nd place), Suan Boon (eventual third place) and I were running together at that moment. It is always therapeutic to hear rhythmic footsteps around you during a run.

As we entered East Coast Park, Ramesh Palaniandy (who was the third-fastest Singaporean at the 2010 Singapore marathon and was injured this year) was there to show his support along with Felicia (one of my masseuses from the SSC). Dinah was also there on her bicycle to cheer us on. With so many supporters, we were just immersed in the fun of running. For me, it was the first time in four months that I had set foot on the ECP and it was great to be back in this running haven.

15km Mark
The bunch of us were still together going at an excellent pace. I checked my heart rate — I was breathing periodically and everything was seemingly in control. More importantly, the foot was behaving well. Girider, my classmate in medical school, also a runner, was there to push us on.

20km Mark
Nearing the turn at about 20km, we spotted Ashley who was going at a strong pace, running in the opposite direction. He was going strong and by my calculation, was about 40 seconds ahead. At this moment, Jason and I also sped up a little in an attempt to catch him. After the turnabout, our group of five split up, and Jason and I went ahead. We trusted the three behind to run at their own comfortable pace and to finish strong.

25km Mark
We managed to catch Ashley as the sun was about to rise. Every year, East Coast Park is my favourite segment of the race as we get to see runners running in the opposite direction. It allows them to cheer for us and for us to cheer for them. Everyone is excited to see each other running and it is just great fun to encourage everyone to push on for a good time. My classmate Ying Hui was there to cheer me on (Thanks Ying Hui!)

30km Mark
We came to the end of the East Coast Parkway (ECP) and the start of the quiet and boring stretch towards Marina Barrage. This is perhaps the worse segment of the race. Too quiet and too ugly. Enough said. Nothing interesting here at all as Jason and I kept on running. I did a foot check – nice and supple — as I started to enter unchartered territory. This was now my longest run since my 30km jog during the recovery period.

35km Mark
We caught a Kenyan runner who had dropped back earlier. We ran together for a while until we hit the Benjamin Sheares Bridge — the heartbreak bridge. Even though this was the second time I was running up this bridge, it was still a terrifying sight. I didn’t want my foot injury to flare up and thus, I took it easy as I went up.

The Kenyan got dropped on the hill, possibly from being overly exhausted earlier in the race. The downhill was a relief but I think it causes more damage to your legs due to the increased impact and breaking action while running down. I could feel some impending cramps.

40km Mark
At the 40km Mark, with the finish round the corner, I was finally able to run with a peace of mind knowing that I was about to successfully complete the marathon without further aggravating my injury. The final stretch was great but the emcees announced our names a little too late such that it was rather quiet near the finish. But, oh well, it was a great race.

Review
I came into the race with the target to defend my title without aggravating my injury and I succeeded. Timing wise, it is the slowest marathon I have clocked in my 5 marathons so far. However, that is not important. The decision to skip the SEA Games and to rest longer before starting training was a right one and it allowed me to end the year on a high.

I would like to thank:
Dr Cormac from the Singapore Sports Institute for his counselling and consultations
Mr Kunalan from SAA for his support
My training advisor and partner Jason Lawrence for the great fun/run
My parents for their support and encouragement
My girlfriend Dinah Chan who fortunately finished her SEA Games (with 2 bronzes!) and had the time to help with my preparation
Sia Chuan Han, 2010 ultramarathon champion, who saw me through thick and thin
My training group runners (group with no name) – Devathas, Colin, Kenneth, Lu Kai, Sia, Evan, Jason … (basically, any runner who joins us for long runs)
Friends – Jayanta, Ramesh, Philip, Girider, Felicia, Ying Hui for waking up early and cheering for us
Runners who cheered for us at East Coast Park – really appreciate it

One thought on “Singapore Marathon 2011”